The last two months have been busy as I am writing the O'Reilly Docker cookbook at night and on week-ends. CloudStack during the day, Docker at night :) You can read the very "drafty" preface on Safari and you will get a sense of why I started writing the book. 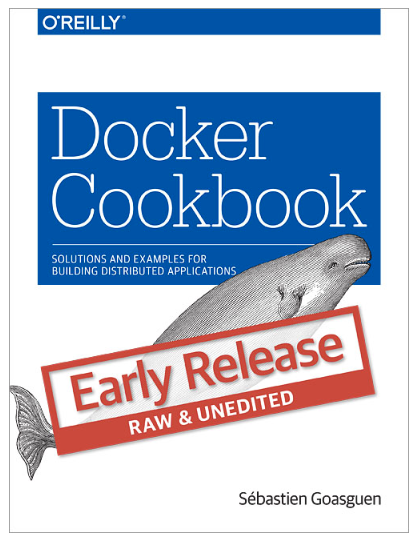 Docker is amazing, it brings a terrific user experience to packaging application and deploying them easily. It is also a software that is moving very fast with over 5,500 pull requests closed so far. The community is huge and folks are very excited about it, just check those 18,000+ stars on Github.

Writing a book on Docker means reading all the documentation, reading countless blogs that are flying through twitter and then because its a cookbook, you need to get your hands dirty and actually try everything, test everything, over and over again. A cookbook is made of recipes in a very set format: Problem, Solution, Discussion. It is meant to be picked up at anytime, opened at any page and read a recipe that is independent of all the others. The book is now on pre-release, it means that you can buy it and get the very drafty version of the book as I write it, mistakes, typos and bad grammar included. As I keep writing you get the updates and once I am done you of course get the final proof-read, corrected and reviewed version.

As I started writing, I thought I would share some of the snippets of code I am writing to do the recipes. The code is available on GitHub at the how2dock account. How2dock should become a small company for Docker training and consulting as soon as I find spare time :).

What you will find there is not really code, but really a repository of scripts and Vagrantfiles that I use in the book to showcase a particular feature or command of Docker. The repository is organized the same way than the book. You can pick a chapter and then a particular recipe then go through the README.

For instance if you are curious about Docker swarm:

This will bring up four virtual machines via Vagrant and do the necessary boostrapping to get the cluster setup with Swarm.

If you want to run a wordpress blog with a mysql database, checkout the fig recipe:

I put a lot more in there. You will find an example of using the Ansible Docker module, a libcloud script to start an Ubuntu Snappy instance on EC2, a Dockerfile to help you create TLS certificates (really a convenience container for testing TLS in Docker). A Docker machine setup and a recipe on using Supervisor.

As I keep writing, I will keep putting all the snippets in this How2dock repo. Except frequent changes, typos, errors...and corrections :)

And FWIW, it is much scarier to put a book out in pre-release unedited than to put some scripts up on GitHub.

Suggestions, comments, reviews all welcome ! Happy Docking !
Posted by Sebastien Goasguen at 5:41 AM No comments: