What a month January 2013 was for Apache CloudStack mailing lists. I have barely recovered from what was our most intense month since CloudStack was donated to the Apache Software Foundation. As some of you know I have been keeping a close eye on our mailing lists, trying to extract valuable information for our community. This was triggered by Qingye Jiang study about CloudStack, OpenStack, Eucalyptus and Opennebula. Since all decisions happen on the mailing list at the ASF, it seemed like a very reasonable method to check the health of our community

I posted some early results in a prior post. With the whirlwind of emails in January I wanted to get a closer look at this past month alone.

First 5144 emails in a month is quite big to put it mildly. Second 2036 from JIRA is a lot. JIRA generates emails automatically, but what we have seen this month is an increase in conversation between developers happening within tickets. This is actually a mode of operation that is very familiar to the HDFS community for instance. I suspect that as we go through graduation, we may find that working tickets directly in JIRA will be very valuable and that JIRA emails will represent valid communication emails.

While affiliation of individual contributors is not recognized within the ASF, I can't help but mention that 57 domains were represented in the developers list versus 63 domains in the users lists. It would not be a stretch to associate an email domain with a company. 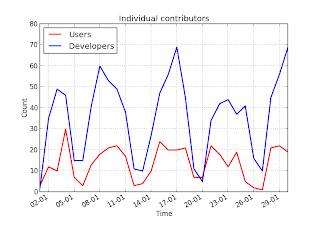 In my previous post I also started a social network analysis. I did it again for this month alone. Below is the social graph of our developers list. To obtain this graph I group emails by thread and create a connection between two contributors if they exchange emails within a thread. Every time the same two contributors exchange an email within a thread, the "strength" of their connection increases. This is represented by the thickness of the line between all nodes. Also the size of the node/contributor matters. The more central a node is within our community, the bigger the node. Centrality is defined as being the shortest path between any two nodes in the network. The graph clearly shows that Chip Childers had the biggest centrality in our developers list in January. That means that for any two contributors to talk, the shortest path was through Chip (Sorry Chip, looks like your inbox is going to get even bigger). Other notables is Chiradeep Vittal, Alex Huang, David Nalley and Animesh Chaturvedi. Nodes that had a small number of connections were filtered out (but their contribution is very much appreciated. I only applied the filter to get a clearer picture). My boss would like to see a dynamic version of this graph, were we can see the evolution of the social network over time...:) Will see, I am just not sure how to automate that... 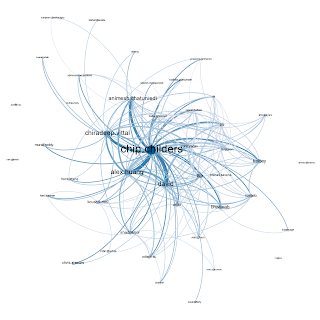 And below is the social graph of our users list. We see that Geoff Higginbottom from Shapeblue is the most influential node on the users list. Closely followed by Ahmad Emneina and Pranav Saxena from Citrix. A new comer is also showing up this month, Geoff's protege, Paul Angus from Shapeblue. It is great to see the leading CloudStack integrator taking leadership in helping users of Apache CloudStack. We also see a new user coming on board strongly: Nux also know as Lucian that I had the pleasure to meet in London. Interestingly we see that the thickness of the connections between the nodes is less than on the developers list and the network is larger. This just indicates that the most influential nodes answer a lot of questions from many different people but that they don't tend to exchange within a large number of threads. Also note that the traffic on the users list is much less than on the dev list. 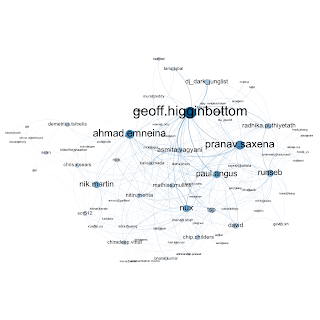 And that's it for January, our highest traffic so far on the mailing lists. We see some strong and increasing participation every day, a clear technical leadership has emerged and some dedicated folks are helping out users.

Posted by Sebastien Goasguen at 8:35 AM