On June 19th we had a Build a Cloud Day in Paris, 60 of us gathered to learn about Apache CloudStack and ear from CloudStack users, integrators and ecosystem partners. We had four great sponsors that helped make the event possible: iKoula a public cloud provider in Paris, Usharesoft a software provider, Apalia a CloudStack integrator and editor of Amysta a CloudStack usage and metering plugin and OW2 an open source consortium. I finally got all the slides and I embed them in this post for your enjoyment. The day started with an intro about BACD and a presentation of the various talks that we were going to have. I talked about the Apache Software Foundation (ASF) and showed how several Apache projects could be used to build a complete cloud infrastructure.

Ikoula followed with a presentation on how to use CloudStack to build a public cloud. Public clouds are the natural evolution of traditional hosting providers, ikoula offers several cloud services based on a default CloudStack install. With 1,000 servers and approximately 8,000 Virtual machines in the cloud it is a perfect example of a public cloud in production with CloudStack. In the afternoon, Joaqium Dos Santos gave an introductory demo on the CloudStack API and CloudMonkey.

Ikoula a Public Cloud on CloudStack from buildacloud

Following a presentation on public cloud, Florent Paillot from INRIA talked about the national continuous integration platform. A built and test system for INRIA researchers. Private cloud used for build and test are a common use case for CloudStack. Florent shared the design and reasoning that went into choosing CloudStack. He also talked about operational details and some issues that he will bring back up to the CloudStack mailing list.

With Public and Private cloud use cases behind us it was time to talk about the software that are available to uses to bring added value and ease of use to their cloud. The first presentation was from UshareSoft, a software that makes image creation and management a breeze. UshareSoft also offers a marketplace ala App Store and a migration service. In the afternoon we had a complete hands-on demo of USharesoft, which boasts a sleek user interface and intuitive image management capabilities.

Activeeon followed just before lunch. Activeeon had already presented at the BACD in Ghent back in January, Brian Amedro the CTO talked about ProActive and its CloudStack Plugin. Proactive is used to manage complex computational workflows in industry such as the financials, pharmaceuticals and video editing. The CloudStack use case was particularly telling: working with a customer they used the CloudStack plugin for video rendering on-demand.

In the fall I had the opportunity to work with a group of students from the Ecole des Mines de Nantes. They developed a CloudStack plugin for BtrCloud, a software that can optimize the placement of virtual machines in the data center. BtrCloud presented the latest development of this plugin, showcasing an embedded user interface and the ability to create various rules (e.g affinity, anti-affinity, spread, pack..) for migration. BtrCloud promises to be very interesting as it could be used for Green IT in the Cloud.

We ended the day with a presentation on cloud usage metering with Amysta. Cloud usage is an internal functionality of CloudStack, which keeps track of all usage in a MySQL database. Amysta extends the core CloudStack metering capability with an embedded interface to create very fine grained usage reports on all resources. Pricing and currency can be set and reports generated in various formats for organizations or individual users.

And that was it in Paris, we will certainly plan another event as everyone was very interested to learn even more. iKoula offered to host a regular CloudStack meet-up, stay tuned for information on that front ! 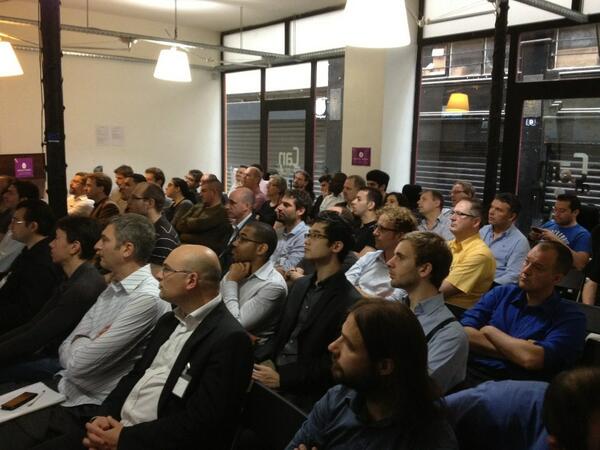 Posted by Sebastien Goasguen at 2:47 AM